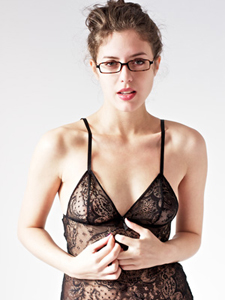 Naked Therapy (N.T.) is an experience that combines elements from positive and person-centered talk therapy, experiential therapy, and creative play therapy, with the added component of the client and/or therapist getting naked to facilitate more honest and unique insights through the experience of arousal. In each Naked Therapy session, I seek to provide my clients with a comfortable, accepting, even fun environment wherein they can develop a sense of self that is empowering, an awareness of their feelings that is freeing, and an understanding of the conflicts that are holding them back from realizing their full potential. Just as dreams unlock the unconscious, arousal unlocks the hyper-conscious. Arousal may be emotional, physical, and/or intellectual.

Naked Therapy is different for every client because it is based on the client’s arousal, which is always personal and unique. And different clients seek Naked Therapy for different reasons. Some are single and they’re trying to get better at meeting someone significant. Some are married and they’re looking for someone new to talk to. Some are having sexual or relationship problems and want help working through them. Some lack confidence around the opposite sex and need to practice and improve in that area. Some have unresolved issues from childhood that are keeping them from realizing their full potential. Some are frustrated and simply need to vent. Some are dealing with pornography addiction and want to overcome that. Some merely want to express themselves and engage in thoughtful conversation with someone who listens. Some are just curious. And some are interested in taking a long, fascinating journey through their arousal.

But nakedness provides every patient with the possibility of letting go of restrictions and inhibitions and also instantly establishes a communicative, intimate, and trusting relationship between the therapist and patient. Instead of the cold, objective, impersonal demeanor of some traditional therapists, the client encounters me, just as I am and with nothing to hide, and as a result he feels less inhibited around me, and by being turned on he’s able to discover things he might not with a clothed therapist.

As of 2012, all of my clients are men, and that’s something I’m very proud of, because men want to be in therapy but traditional therapeutic practices have proven increasingly unattractive to them. As these statistics make painfully clear, men represent the vast majority of those in crisis. Yet as this article points out, therapy is quickly becoming something that only women seek. In other words, there is a major and growing disconnect between those who need therapy and those who are getting therapy. And what has been traditional therapy’s response to this disconnect? In general, it’s been to say that men “don’t get it.” Well, I say it’s not men who don’t get therapy, it’s therapy that doesn’t get men. Naked Therapy is first and foremost an attempt to create a form of therapy that men want to participate in because they feel it’s relevant to their lives, thoughts, and feelings. An expanded version of my views on this Global Mental Health Crisis can be found here.

Here’s a list, far from all-inclusive, of some of the things my clients and I work on together in our Naked Therapy sessions:

These issues are symptomatic of what I call the new male hysteric, which I expound on here.

While the text below provides some early thoughts on the value of arousal within the therapeutic context, my methodologies and therapeutic perspectives are constantly developing. Most recently, I have begun investigating how Naked Therapy is inevitably conducted under the rubric of the broader concept of performance art therapy, a therapeutic experience in which the client joins the therapist in a performative event that is mutually constructed, dialogic, and directed toward the release of the client from whatever he feels is hindering him from genuine happiness.

What’s So Important About Arousal?

By linking arousal and sex, and therefore forbidding arousal because sex is forbidden, we have failed to understand and fully utilize therapeutically what happens to us psychologically when we are aroused. Perhaps the closest we’ve come to explaining that is the tantric philosophy, typified by such books as “From Sex to Super Consciousness” by Osho. And while it respects and gains some impetus from this spiritual approach, Naked Therapy is a more “Western” analytic approach that is both informed by 21st century realities (such as the Internet) that encourages and utilizes in a therapeutic context the mental causes and effects of physical arousal.

Naked Therapy is based on the assertion that it is not enough to say a person seeks arousal just “because he naturally wants sex.” People seek physical arousal not only to feel physically good, but for the emotional, inspirational, and mental benefits and effects of it. It relieves their stress. It stimulates sections of their brain not reachable in other ways. It excites them about their lives. It puts them in touch with who they are, what they want, and what they imagine they might be. Indeed, I would assert that helping a man open up to his aroused mind is akin to helping him open up to his unconscious mind. Just as Freud said “your unconscious thoughts mean something personally relevant to you,” Naked Therapy says “your arousal thoughts mean something personally relevant to you.”

And indeed, Freudian Psychoanalysis and Naked Therapy have, in a certain sense, similar beginnings. Freud devised a therapeutic method meant to treat what was ailing turn-of-the-century women, while I have devised a therapeutic method to treat what’s ailing turn-of-the-century (albeit a different century) men. Freudianism was born out of the practices of hypnosis and mesmerization when Freud posited the existence of an unconscious given what he saw hypnotized patients doing. So too is Naked Therapy sourced in a new form of mesmerization – men in states of arousal (for my thoughts on arousal and women, click here). Who can watch a man become aroused by a naked woman and not sense that he is in some way “mesmerized”? From this observation, Naked Therapy posits that there is an “arousal state” in the brain. But the brain does not seek this for purely physical reasons. The brain seeks this arousal to heal, to discover, to learn, to become aware of things it cannot otherwise become aware of, for this state is as unique in the human mind as is the unconscious state of dreaming.

In other words, arousal is a mental state that we seek for its own sake, and we have let the physical nature of it cloud us from looking at it more closely for what values it might hold in terms of informing us about ourselves. But this makes sense, for “dreams” used to be just what we did when we slept (just like “arousal” used to be just what we did when we became sexually excited). It’s seeing arousal in a new light – as a state of informative mental material personally relevant to the client who could not gain access to this material in any other way – that is at the basis of my Naked Therapy practice.

Looking for something to get you aroused…feeling aroused…satisfying your arousal with yourself or with someone else…what arousal tells you about yourself…how being aroused changes how you see yourself…why you get aroused by what arouses you…how you handle yourself while feeling aroused…it’s all been belittled as basically meaningless (or worse…destructive).

But Naked Therapy is changing all that. Just like Psychotherapy said that dreams mean something personally relevant, Naked Therapy says that arousal means something personally relevant. Arousal is as unique a mental state from non-arousal as consciousness is from unconsciousness. When you are aroused you are being given information about yourself (just like when you dream) that you cannot access in any other way. Just like Freudianism is entirely based on helping the patient access his unconscious thoughts, Naked Therapy is entirely based on helping the patient access his arousal thoughts. That’s why Naked Therapy studies and attempts to utilize in the therapeutic context what kind of mental information emerges in states of arousal in order to see how it might be used to help patients live freer, happier, healthier lives.

For in the end Naked Therapy is based on the belief that since we live in a world full of arousal, arousal should be allowed, explored, and respected in the therapeutic context. And people are waking up to this idea. They are starting to realize that because traditional therapy forbids arousal, it’s a lot like trying to teach someone to swim by talking to him about it.

Naked Therapy puts you in the water.

Thank you for taking the time to inquire about Naked Therapy, and I look forward to talking with you in a state of informing arousal.